Aha Video Upcoming Telugu Movies 2022 List: Aha App, the only app dedicated to Telugu film fans, will release a large selection of films in 2022. Numerous Telugu blockbuster films, including Krack, zombie Reddy, Naandhi, Sulthan, and now Love Story, have already been acquired by the OTT platform for digital streaming. The platform is flooding its customers with more Originals, Shows, and Web Series as a result of this increased funding. 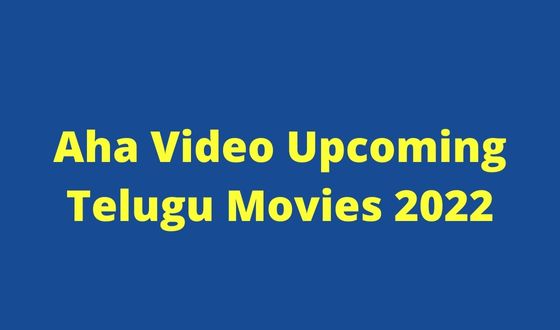 When Aha App was released in January 2020, no one anticipated such a large number of downloads and viewers. We can argue that the COVID-19 lockout is a game-changer for Aha OTT App, which is quickly becoming one of the three leading OTT platforms for Telugu content. In addition, no other OTT platform has released as many movies during the lockout as Aha. We may claim that Aha has employed its time effectively by focusing on Telugu dubbed films and low-budget films to delight the public and promote app downloads.

To provide its customers with 100% Telugu material, Aha Telugu App has introduced new Telugu films. The primary objective of Aha.video is to provide its global audience with 100 percent Telugu content. Within a few months, the Aha Telugu App attained its first objective and is now planning to expand its business by adding more diverse shows and Aha Web Series. Also, Aha is rapidly expanding outside Telugu into other languages.

Why Aha is Better Choice Than Other OTT’s?

In keeping with its pledge to be the definitive destination for Telugu entertainment, the network intends to unveil a vast lineup of Aha Originals & Series. In addition, the dubbing versions of the Tamil and Malayalam films listed above are currently streaming on this OTT service.
Aha is the only dedicated OTT platform for Telugu content at present. Therefore, there will be no linguistic difficulty. In contrast to other OTT platforms, Telugu cinema enthusiasts can navigate between genres without confusion. If you do not understand Telugu, you can watch movies with English subtitles. Globally, Aha is the finest OTT platform for Telugu-speaking audiences. One of the distinctive features of Aha is the unfettered availability of Telugu-dubbed films.

In India, Malayalam and Tamil films have a strong reputation for their storylines, variety, music, cinematography, and story-driven, realistic themes. In terms of providing audiences with realistic stories, Telugu cinema has always lagged behind these other industries. Aha Telugu App has purchased the dubbing rights for numerous content-driven Malayalam and Tamil films in order to fill this void. Here is a complete list of Aha films with Telugu dubbing.
In order to provide the best pleasure to the Telugu audience, Aha App has added a large number of Aha Telugu dubbed films to its film library. All of these films were dubbed into Telugu from the Malayalam, Tamil, and Kannada languages. You will get the Aha Telugu Dubbed Movies List 2021 on this page.

Are you aware? Aha has the most affordable pricing levels among all digital streaming platforms. A one-year membership to an OTT costs Rs. 399. As a special discount, Aha.video has introduced a new promo code, “aha100,” with which you can receive an additional Rs.100/- off your purchase. Then why are you holding out? Apply this offer to receive Aha App at a discount.

The Aha.video App is now available in numerous countries, including the United States, the United Kingdom, Canada, Germany, Poland, Kuwait, and others. Plans and pricing in various nations vary according to factors like economic structure, taxes, and others.

The Aha Telugu OTT platform is compatible with a variety of devices. The following is a list of electronic devices supported by the Aha App.

Who is the Owner of Aha OTT App?

Does Aha.Video App Available in Other languages?

Currently, Aha is only available in English. The administration intends to expand its services to include South Indian languages such as Tamil, Malayalam, and Kannada in the near future.

How can I watch Aha Movies Free?

Yes, you may view certain movies for free on the Aha OTT App. To gain unrestricted access to hundreds of movies, series, and originals, however, you should subscribe to their premium plan.

How to connect Aha App in Jio TV?

For further information about the Aha App’s compatibility with television, please contact the Aha support team.