Telugu Movies Highest TRP Rating 2022: Weekly, BARC releases the TRP ratings for movies, TV serials, and TV shows in all languages. Of course, the best Telugu-language channels include Gemini TV, Star Maa TV, ETV, and ZEE Telugu. BARC calculates the potential audience for a commercial airing in movie and TV commercial breaks. From this information, we can all make educated guesses about which Telugu films have the highest TRP ratings. We have also compiled a list of the Telugu films with the highest TRP ratings for the year 2022. 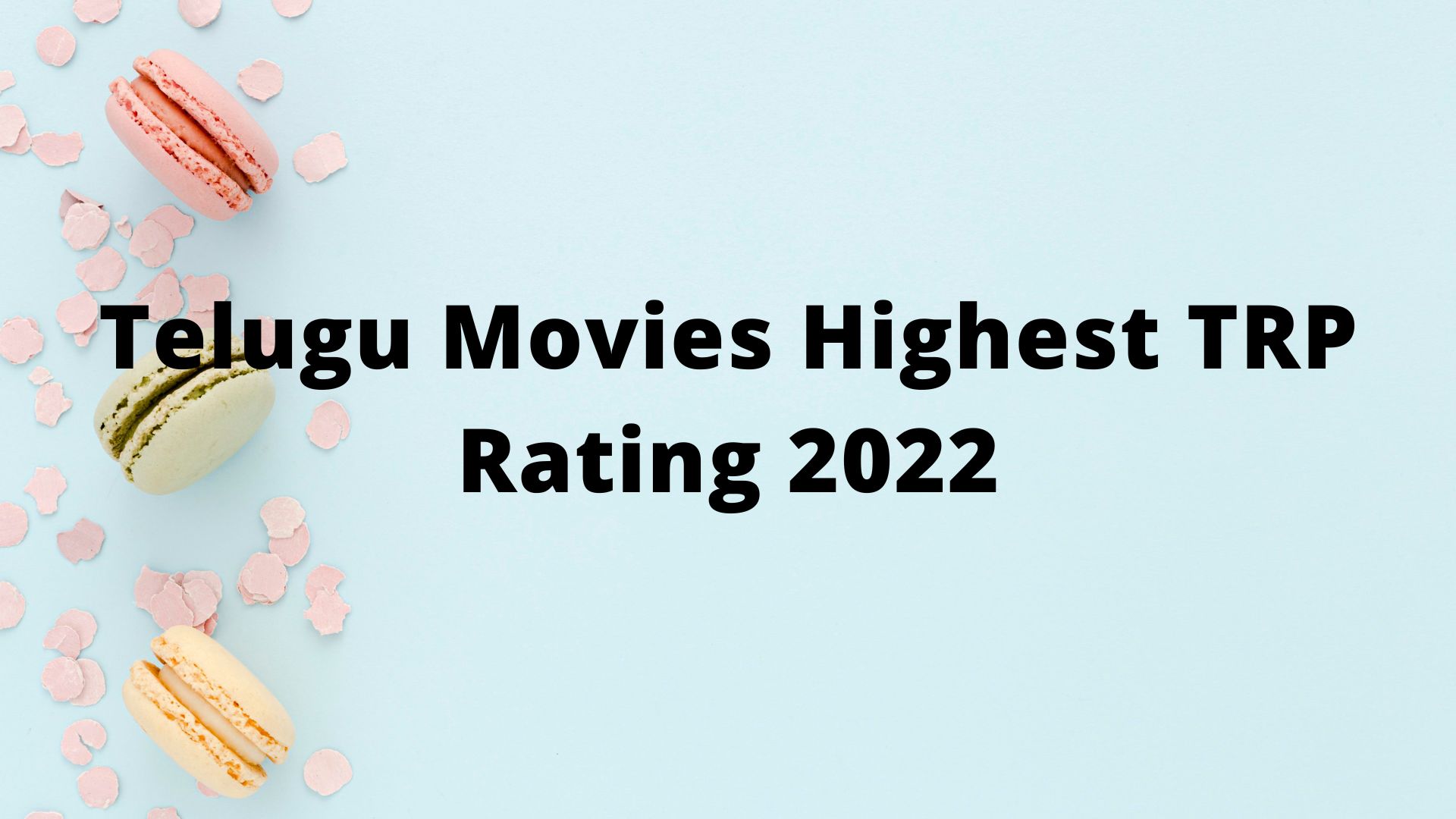 Consistently occupying the top five spots in the TRP rankings are Star Maa, Zee Telugu, ETV, Gemini TV, and Star Maa Movies. Many 2022 film premieres occurred on the highest-rated television networks. Uppena, the most recent blockbuster in the Telugu film industry, premiered on Star Maa TV to a world-record 18.5 TRP rating, making it the network’s most watched programme ever. Similarly, movies like Ala Vaikunthapurramuloo and Sarileru Neekevvaru earned 29 and 23 trp ratings, respectively, and ranked first and second respectively in the previous year. If you want to know which Telugu films have the most TRP in 2022, read this article in its entirety.

Starting with the BARC Official Date, we shall publish weekly updates to the List of Highest TRP Telugu Movies Rating 2022. Now, let’s go to our major TRP ratings of the best Telugu movies. This February 2022 revision of the list of trp ratings for Telugu films is available. The most recent Telugu films and their Entertainment TRP Ratings, along with positions, are available here.
Many individuals in India have been forced to stay inside their homes during the Lockdown, where they can enjoy movies and other forms of entertainment. Many recent Telugu films have achieved their highest TRP ratings at this time. Several films have managed this, including Ala Vaikunthapurramuloo, Sarileru Neekevvaru, Prathi Roju Pandage, Vinaya Vidheya Rama, and others.

Check out the Top Rated Telugu Movies of 2022, as determined by the Broadcast Audience Research Council of India, or TRP.

The highest-grossing Telugu films of all time (based on TRP ratings) will be available here as well (until 2022).

Except for Baahubali 2: The Conclusion (22.7 TRP) and Baahubali: The Beginning (21.8 TRP), the top five highest-rated Telugu films of all time are as follows.

The latest film starring Allu Arjun, “Ala Vaikuthapurramuloo,” was released on Sankranthi 2020, and it has already become his most financially successful film to date. After doing well in theatres for six months, the film is making its world premiere on SUN Group’s Gemini TV. According to the TRP, the film performed better than any other Telugu film ever on television. Trivkram directed and produced the film Ala Vaikuthapurramuloo under the banners of Harika and Hasini Creations. The film’s score by SS Thaman is its most notable aspect. Popularity of SS Thaman’s music continues to rise throughout streaming platforms. A lot other people saw it too.

On March 25, 2020, Gemini TV aired the premiere of Sarileru Neekevvaru, starring Mahesh Babu, in honour of Ugadi. Sarileru Neekevvaru’s TRP for its international premiere was 23.04. This new action-comedy picture, featuring Superstar Mahesh Babu and Rashmika Mandanna, is currently the second highest-rated film of all time, according to the TRP ratings system. And after a 13-year hiatus, Lady Super Star Vijayashanti makes her film debut in this one. Sarileru Neekevvaru, starring Mahesh Babu, has dominated the highest TRP charts of 2020. On the eve of the Ugadi festival, Gemini TV aired the film’s international premiere, earning a TRP of 23.4.

Star Maa, which aired the film for the first time anywhere in the world, received unprecedented viewership of 18.5% during the broadcast. This is a first for our hero, our heroine, and our new director.

Prati Roju Pandage, starring Sai Dharam Tej and Raashi Khanna, was a huge success both at the box office and on television. With a massive 15.3 TRP rating, Prati Roju Pandage was among the highest-rated films of all time.

Do you want to know how well a Telugu-dubbed movie performed at the box office? then you should read this part. The most grossing Telugu dubs are listed below.

Does the Movie Success Affects TRP?

When it comes to achieving the highest possible TRP, box office success has zero bearing, especially in Tollywood. In recent years, many Telugu flop movies have set ratings records on local TV. This incredible feat was accomplished by big-star flops like Athadu and Vinaya Vidheya Rama, which were only shown in modest theatres. Recent Bollywood bomb “Laxxmi” also set a record for highest TRP for an Indian film, despite being a massive failure. Therefore, it can be concluded that the movie’s TRP on TV has little to do with the film’s success.

It is based in Hyderabad, Telangana, India. Telugu TV industry also is known as Tollywood TV Industry.

✅ What Are The Top 5 Telugu Entertainment Channels?

✅ Which is the Oldest TV channel in Telugu?

Gemini TV and ETV are the oldest TV channels in Telugu

✅ Which Telugu TV Channel has bought the Satellite Rights of Vakeel Saab?

✅ Which Movie can Break the Ala Vaikuthapurramuloo TRP rating?

The details are RRR Satellite Rights not yet revealed.

✅ Which Telugu TV Channel has Highest TRP Every Week?

Star Maa is currently ruling the Telugu TV entertainment industry with highest TRP ratings every week. The reason is simple, it has many programs that creates audience attention.

✅ What is the upcoming biggest TV program in Telugu?

Evaru Meelo Koteeswarulu is the upcoming and most awaited TV program hosted by Jr NTR in Gemini TV.