ZEE5 Upcoming Telugu Movies 2022: ZEE5 is one of India’s most popular OTT platforms operated by the ZEE TV network group. Using the ZEE5 app, you can watch an endless number of Telugu TV Shows, 100+ Originals, Movies, Daily Serials, News, Live TV, and many other programmes. The ZEE5 Telugu internet streaming portal is continually updated with new Telugu films and Telugu dubs. Therefore, we have compiled a list of forthcoming Telugu films available on ZEE5 OTT. 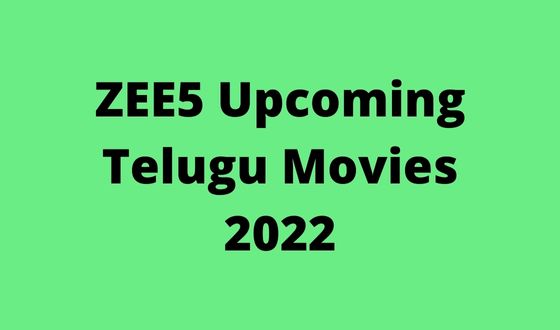 Telugu content and Telugu web series have become one of the most popular sources of entertainment on leading OTT platforms such as ZEE5, Amazon Prime Video, Netflix, etc. To help you get started, we have produced a list of the top Tollywood films that you would want to watch repeatedly.

Tollywood currently dominates the Indian film industry with high-budget films that have the potential to attract a pan-Indian audience. Each year, hundreds of Telugu films are released in theatres and on digital streaming services such as ZEE5 Prime Video, Netflix, etc. If you are a fan of Telugu films and are curious about ZEE5’s upcoming Telugu films in 2022, you should read this entire post.

These are the upcoming Telugu films that will be available on ZEE5 OTT in 2021. However, we will keep the old information regarding digital release dates for some time. On ZEE5, you may find new movies that are currently accessible for streaming. Additionally, you can use IMDB ratings to determine the release dates of upcoming films. In addition, there is a monthly listing of forthcoming Telugu films.